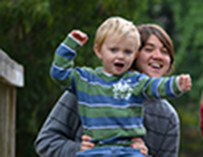 When my youngest son was a year old, I became frustrated with mainstream health care, and I knew that I was on the wrong track. Having seen four different pediatricians in my first three years of motherhood, I hit a brick wall when I was told that our newest pediatrician would no longer see us if we did not agree to allow them to give my then one-year-old son the quad vaccines (Mumps, Measles, Rubella and Varicella.) At the time my, son was struggling with constipation and a yeast infection under his arms and behind his legs as well as thrush. He had experienced severe reactions to his past vaccinations, but the hours of screaming, the welts, the lethargy and unresponsive behavior was dismissed by his doctor.

These were chronic ailments in his first year of life, and no matter how much I complained to doctors about him throwing up, sounding congested, being irregular, moody and colicky, I was told “It’s normal.” I remember saying “I don’t care if it’s normal...it’s not okay!” but I was just seen as a neurotic Mom and an irritant. One night at 2:00 AM, while my son screamed in pain, and I carried him around the house trying to calm him, I googled his symptoms and found a blog about a Mom who brought her child to a chiropractor for these very issues. WHAT? It seemed crazy! Chiropractors were for old men with back pain, not gassy babies, but I had tried EVERYTHING else, so the next day I found a chiropractor in my area, Dr. Todd Defayette. 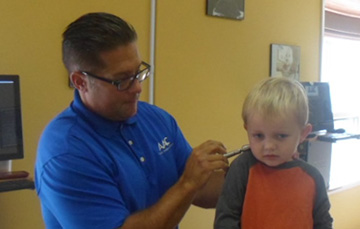 In the months that followed, my youngest son was diagnosed with Autism Spectrum Disorder. There was a time when I felt I was losing my son. He was drifting further away, he was uncomfortable in his skin, and uncomfortable in our world, and so he tried to get out of both. Chiropractic care not only brought my son back to me, but it also gave me a community of people who believe that the “norm” isn't good enough. People that believe that 1 in 68 children diagnosed with autism is not an acceptable statistic. People that believe that childhood ailments, illnesses, allergies, asthma, and autoimmune disorders are not an acceptable trend. People who were willing to show me a path to changing my children’s future and giving them a better world.

It was everything healthcare should be. I was given knowledge, resources, information and support. Through this support, I found a new pediatrician who offered the same. I wanted to be a part of offering this community to children and parents around the world. My dream is that no other mother leave her child’s pediatrician sobbing, without answers and feeling shamed. You are not alone, your situation is not hopeless. Wipe your tears because the answer is here.